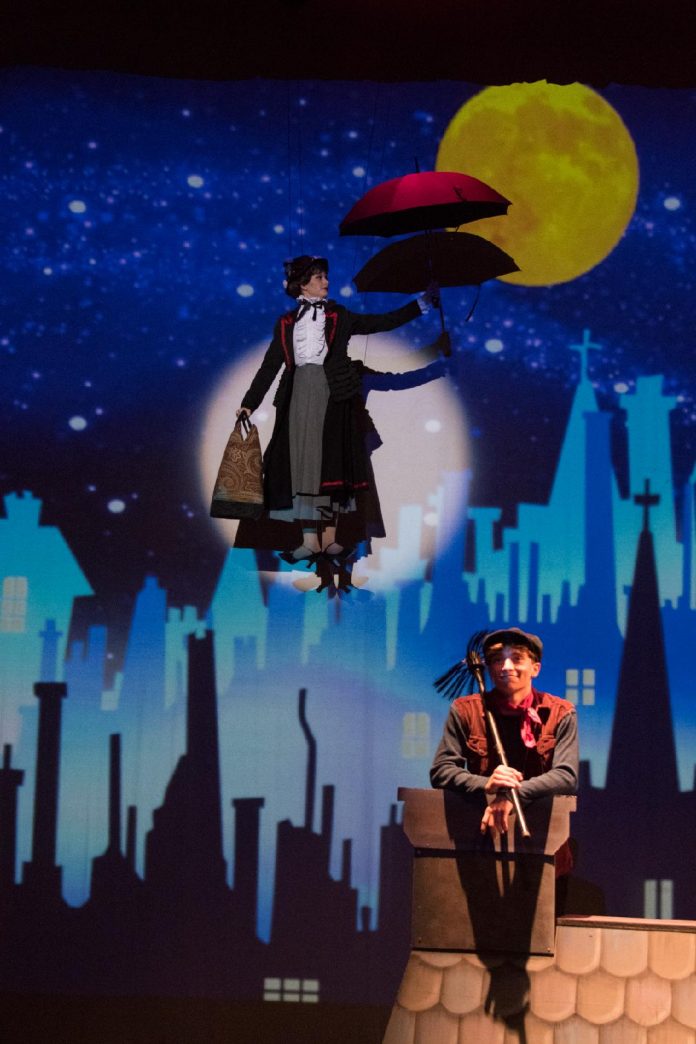 The whimsical nanny, herself, tells us, “In every job that must be done, there is an element of fun,” and clearly, MTA’s impressive cast of 10- to 18-year-olds is having as much fun entertaining the crowd as the enthusiastic crowd is enjoying this charming rendition of the Broadway mega-hit.

Much-admired Artistic Director Jimmy Hippenstiel has found a way to recreate the larger-than-life world of Mary Poppins without sacrificing any of the enchantment of the original Disney film classic.

As one of the most technically difficult shows MTAOC has ever produced, the special flying effects were engineered by Special Consultant and Designer Mike Wong, who has also created magic by using old-school theater tricks such as a full-length hat stand that is pulled out of Mary’s carpetbag, a broken table that repairs itself, falling wall shelves that readjust, and a cake that inflates its own tiers.

There is imaginative use of projections on backdrops and scrims that brings Cherry Tree Lane, London rooftops, flying birds, starry skies, and rainy days into the scene.

Wouldn’t it be nice to have a flying nanny “pop in” (hence, the Poppins) when a relatively dysfunctional family needs help sorting out what’s important in life? Enter Miss Mary Poppins who is unquestionably the one for the job.

She is portrayed by the talented Gianna Holiday whose gorgeous soprano vocals seal the show with, hands down, one of Orange County’s most winning performances of the season.

Holiday needs no help making this role her own as the proper, but not stuffy, Mary who takes control of everything around her but always with a quick wit and a no-nonsense attitude.

Dual roles for Bert are portrayed by Lorenzo Cid and Mack Hubbard, and, also Emma Hammond and Anysa Wilson, share the role of Winifred Banks.

Max Ritter shines in his equally challenging role as George Banks. Mable Sumner is a joy to watch as Jane Banks, and Landon Maur is also great as the mischievous Michael. Tate Schuda is delightfully menacing as Miss Andrew.

“Spoonful of Sugar,” “Let’s Go Fly a Kite,” and other favorite songs by Richard and Robert Sherman are pivotal to the musical, but George Stiles and Anthony Drewe’s new music including such as “Practically Perfect” and “Anything Can Happen” are wonderful additions.

The show-stopping “Step in Time” where Mary, Bert, Jane, and Michael join the chimney sweeps is an extraordinary and perfectly timed tap-dancing spectacular. The lively, full-sounding orchestra is conducted by Taylor Stephenson and directed by Richard Abraham.

MTAOC’s well-rehearsed cast and crew is the real magic in this  Supercalifragilisticexpialidocious production, and it is one of the very best feel good family friendly must see shows to date.

Fly over to catch some of the last performances of this wonderful show. 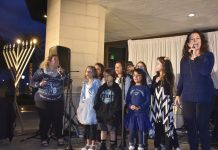 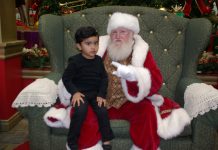 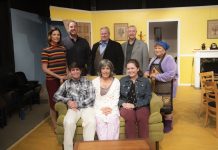 ‘Tenor’ will make you LOL